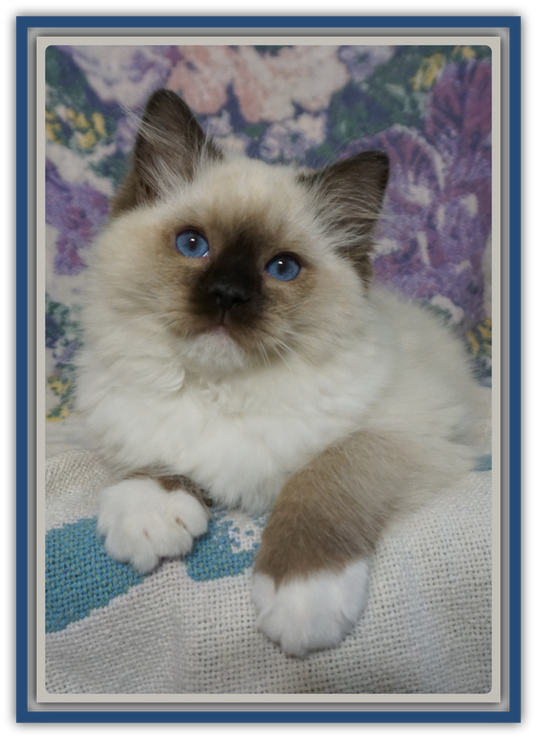 MoonCrest Sweet William is a seal point mitted male with an adoption price of $1850.  William was formerly Violet and a kitten I  had chosen from Magic's litter to hold back for my breeding program. I identified him as a male when he was first born, but after several reevaluations, determined that he was a female.  It was clearly wishful thinking because after yet another examination, she officially became a he  which was verified by my vet and his DNA testing that I sent in.  I did not send in his DNA to determine his gender, however it is part of the 50+ things they test for.  So.......William is up for adoption  William does have a bit of color where he should have white on his hind legs but I do not believe it would affect his ability to do well in the show halls.  He has good structure and does not have any physical flaws.  He meets the Ragdoll Breed Standard well.  He is a social kitten that seeks out attention and affection and is happy receiving both.  He is well balanced and enjoys human interactions but is equally comfortable with his feline siblings. ​Dazzle Me
and
Demi
Planned Summer

Kittens will be blue and seal in colorpoint and mitted patterns.

Waitlist will open
when pregnancy is confirmed 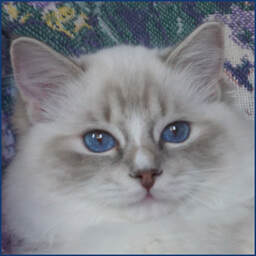 ​
Dazzle Me
and
Libby
Planned Summer
Kittens will be blue in colorpoint,
mitted or bicolor patterns
with or without lynx.
​
Waitlist will open
​when pregnancy is confirmed