July 13, 2021
The "A" kittens are scheduled for their spay/neuters on Thursday (July 15th) and are almost ready to go to their new homes.  This has been a wonderful litter.  Very laid back and comfortable with each step of their development.  We had an adopter back out at the last minute so they are now available again. 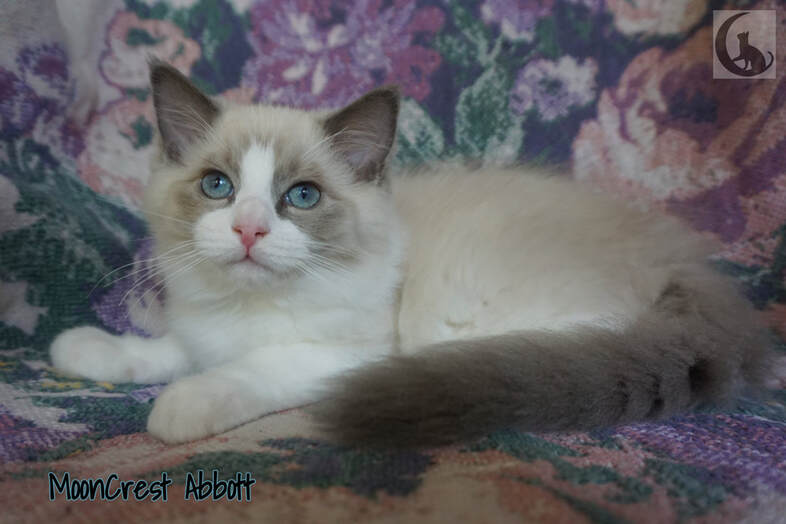 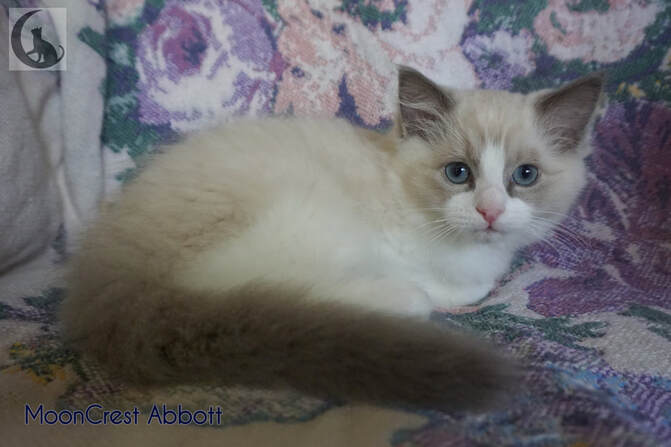 MoonCrest Abbott is a blue bicolor male.  He is perfectly marked and his adoption pricing is $1650.  Abbott is a very social boy and loves giving and getting attention and affection.  He is a sweet boy and quite outgoing.  He will be happiest in a home where he has companionship, either two or four legged all the time.  He loves his humans most so a human family that is home most of the time is where he would thrive.
Avery is a blue point bicolor female.  She has some color mismarks on her back legs and her adoption pricing is $1650.  Avery is a bit of a princess and can sometimes be a bit reserved.  However, as she has matured she has become much more comfortable and enjoys being held and given love.  I think because she is one of only two girls out of eleven, she tends to hold back a bit from the boy's roughhousing. The more time I spend with her, the more she melts into being held and scratched and loved.  She is a feminine girl and is very pretty.  I feel that Avery would do well in a home where she can has on one time with her person and be the pampered pet without any competition from other kitties or a home with a younger female kitty that she can be friends with. 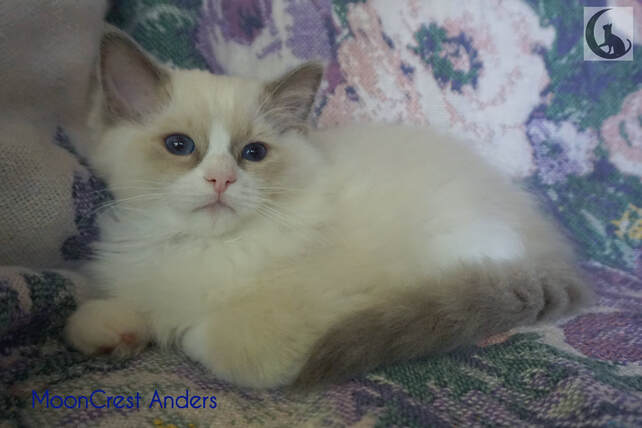 Anders is a blue point bicolor male.  He has color mismarks on his back legs and his adoption pricing is $1650.  Anders has the most stunning sapphire eyes which he inherited from his mother.  He is floppy and mushy like the rest of his littermates and is a follower.  Anders seems to fly under the radar for me because he is quite laid back and prefers catnaps over the kitty all star wrestling matches.  Most of the time when I look for him he is sound asleep in the top of the cat tree.  When I wake him up for scratches and love he melts into it. I feel he would do well with a family that is comfortable with a couch potato kitty.
June 13, 2021
Whew....it was HOT!!  We have some new photos of Madison's kittens.  They had their first vaccination and did very well.  They were all above average in weight and maintained their mushy, casual status in a new environment with strangers handling them.   They also have names now.  Enjoy! 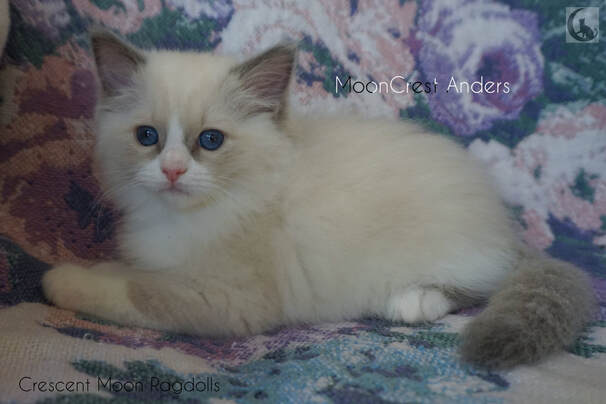 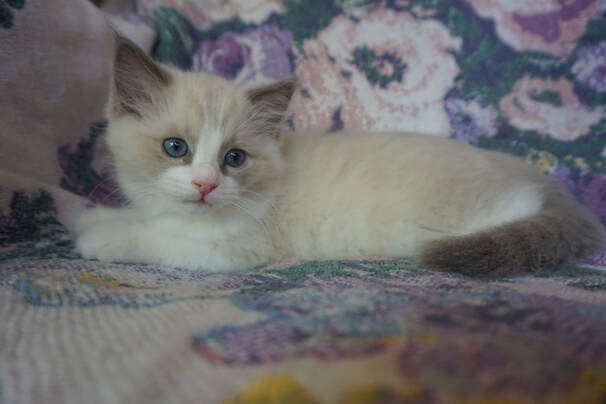 May 27, 2021
I would like to introduce you to Madison's "A" kittens. They are 6.5 weeks old and round little puff balls.   They had their first photo shoot yesterday and I am quite pleased with them.  The entire litter is quite laid back (at this time) and floppy.  Of course that can change as they grow, but for now they are quite content to be held and handled and seem to take the "black box(camera)" in stride.  Mama Madison is a first time mom and after a bit of a rough start, she has taken to it like a champ.  I placed Madison and her kittens with a "rock solid" queen and her kittens so she could get a bit of help and all is going very well.  Madison's kittens are clean, content, chubby cherubs.  They have transitioned to solid foods and are using the litter boxes without issues.    ​